Royal Commission into Mental Health must not include McGorry

No psychiatrists in a Mental Health Royal Commission

Legislative Council E-Petitions (only people living in Victoria can sign)

No psychiatrists in a Mental Health Royal Commission

The petitioners therefore request that the Legislative Council call on the Government to exclude any psychiatrist from advisory or chairing positions during a Royal Commission into Mental Health, as this will pervert the course of justice for a Royal Commission into the corruption and abuse of the Victorian mental health system.

Request: We, the Victims of Psychiatrists (VOP) and allies, therefore ask the House to request the Prime Minister and the Attorney General to abolish all State/ Territory Mental Health Acts and Federal Legislation that perpetrates Forced Psychiatry, stop discriminating (on the basis of perceived disability, financial and social disenfranchisement, atheist beliefs, religious and creative expression of the unknown or undefined) and if necessary replace these State/ Territory Mental Health Acts with a Federal Human Rights and Reparations Act, equivalent to the signed and ratified United Nations Convention On The Rights Of Persons With Disabilities.

PUBLISHED BUT NO RESPONSE FROM GOVERNMENT YET.

The Petition of certain citizens of the State of Victoria draws to the attention of the Legislative Council the hazard of personal products being brought into workplaces and community spaces causing accumulation of petroleum-based and other toxic chemicals to a hazardous level.

High exposure to toxic chemicals in personal products disables people to the extent that they are not able to work. Human bodily immune system reactions may manifest in allergies, asthma, cancer, lowered productivity and emotional suffering, which often gets a referral to a psychiatrist. This does not help the situation, as the workplace hazard is not investigated and more exposure to toxic chemicals results.

Currently hospitals are not healthy places for people with Multiple Chemical Sensitivities, as hospitals have chemicals such as Propylene Glycol (a petroleum-based substance that mimics cell chemotaxis) in the food, air and medicines. This is something of particular concern when Victoria still has draconian arbitrary detention on the basis of perceived disability and forced treatments under the Victorian Mental Health Act 2014. These products are forced on people who may already be suffering an overdose of petroleum-based chemicals and be subsequently sensitised due to these treatments. Deodorants, perfumes and other personal products and the psychiatric medicines that are forced on a person cause severe suffering.

Repealing the Victorian Mental Health Act 2014 has also been requested by the United Nations Convention on the Rights of Persons with Disabilities (CRPD) Committee, as discrimination on the basis of disability, arbitrary detention and forced medicine is illegal under this signed and ratified covenant.

(1) ban the use of petroleum-based deodorants, perfumes, and other toxic products in the workplace;

(3) make it a WorkSafe policy to have workplaces free from toxic deodorants and perfumes;

(4) make it mandatory for safety masks to be worn should hazardous products be necessary in the workplace; and

(5) repeal the Victorian Mental Health Act 2014 on the basis that forcing people with sensitivities, allergies, asthma, cancer and other reactions or vulnerabilities to the high levels of toxins in hospital spaces and medicines is unethical and unhealthy.

Sign here (only people who live in Victoria, Australia) 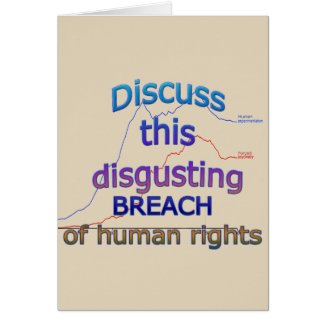 Discuss this disgusting card
by InitiallyNOcreations

Forced psychiatry & it's iatrogenic killing & maiming should not be government legislated, it should be a crime. Australia is one of the worst places in the world for Forced Psychiatry. The petitioner is father of VOP Garth Daniels, who is still not free from forced psychiatry.

This petition has been presented to the House of Representatives

HEALTH MINISTER HAS RESPONDED WITH LETTER TO PETITIONER

All too often people suffering from environmental pollutions are mentally-illed and forced to suffer even higher doses of the chemicals that are harming them. The eugenics term 'hygiene' is perverse and insidious.

This petition has been presented to the House of Representatives & referred to the Health Minister.

NO RESPONSE FROM GOVERNMENT YET

'It was introduced by prejudice and instigates the discrimination against persons with psychosocial disability that they were dangerous to commit such terrible crimes.'

2)     Immediately investigate the possibility of human rights violations in Japanese psychiatric care due to unnecessary and lengthy use of physical restraints.

3)     Implement policies requiring visualization (e.g., video footage) whenever physical restraint is employed, and allow access to such recordings for patients or next of kin within 14 days to determine the actual conditions employed.

4)     Set concrete benchmarks to which to lower the number of restrained patients, the average length of restraint, and a proposed date by which such benchmarks should be met.

5)     Instruct the Ministry of Health, Labour, and Welfare to ensure that hospitals provide medical records to patients or their surviving family members in the case of serious medical incident or death.

1)     In regards to physical restraint in psychiatric care, the Criteria for Treatment Established by the Minister of Health, Labour and Welfare in accordance with Article 37, Paragraph 1 of the Act on Mental Health and Welfare for the Mentally Disabled states that "because physical restraint is highly limiting and has the potential risk of causing secondary physical damage, it is a method of limiting movement that should only be allowed as a temporary solution when unavoidable until an alternative solution is found, and efforts must be made to switch to an alternative method as soon as possible." However, according to data from the Ministry of Health, Labour, and Welfare, the number of patients being restrained is increasing and had already exceeded over 10,000 as of 2014 – the highest ever recorded, and more than double the number a decade earlier[1].

2)     According to a survey of 689 patients in 11 hospitals published in 2016, the average length of restraint was 96 days[2]. In other countries, average restraint times are on the range of a few hours or dozens of hours. These data were discussed at the 193rd parliamentary meeting of the committee on Health, Labour, and Welfare, but Japan continues to be far out of line with international standards.

3)     Multiple patients have died while restrained[3,4]. In 2017, 27-year-old Kelly Savage, a dual citizen of New Zealand and USA, was restrained for 10 days in a psychiatric hospital in Kanagawa Prefecture until he suffered a cardiac arrest that led to his death. This incident has been widely reported by the New Zealand Herald[5], UK Guardian[6], and various international news outlets. This is not an isolated incident – the length of Kelly’s restraint was well below the national average.

4)     Article 25 of the Constitution of Japan states that "all people shall have the right to maintain the minimum standards of wholesome and cultured living. In all spheres of life, the State shall use its endeavors for the promotion and extension of social welfare and security, and of public health." As such, Japan has a responsibility to address the problem of physical restraint in psychiatric care.

Electroshock, otherwise known as ECT, is a barbaric, archaic, and brain damaging procedure that destroys lives. It has never been proven safe or effective. Recent studies show it causes permanent cognitive dysfunction and memory loss and an inability to work in one third of its victims. It is repetitive craniocerebral trauma that harms people who are sick, distressed, and vulnerable. This psychiatric assault needs to be banned; it is a human rights violation.

The CPA and APA have continued to misrepresent ECT as a useful procedure. They are biased in their view and fail to answer to the brain injuries they are causing people, primarily older women. ECT has been banned in Luxembourg, parts of Italy, and Slovenia and is severely restricted in some countries.

This petition will be delivered to:

The Minister of Health

'My name is Gillian Speke. Please help release MY GRANDDAUGHTER from CYGNET HOSPITALS by signing our petition. She needs to be near to her Nan. 8 YEARS she has been incarcerated. Her physical & mental health have deteriorated, she has had no help from a Nearest Relative because this has not been attended to. Her weight has doubled due to the long list of meds she is forced to take. She has to stay on a secure BIpolar ward, she gets no fresh air or exercise, there is no structure, no organised activities except for Mindfulness & she has been denied access to education for the past 11 YEARS. She has not had an assessment for a move to the community as promised in 2016. She is DYING in there. She does not deserve to be punished. She is a vulnerable woman who needs help for Trauma (PTSD). PLEASE HELP GET HER OUT!'

- Conform french law to UN CRPD conventions (Rights of Persons with Disabilities) and CAT (Against Torture). CRPD General Comment 1 on article 12 and Guidelines on article 14.

Abolish Ban the use of ECT in New Zealand